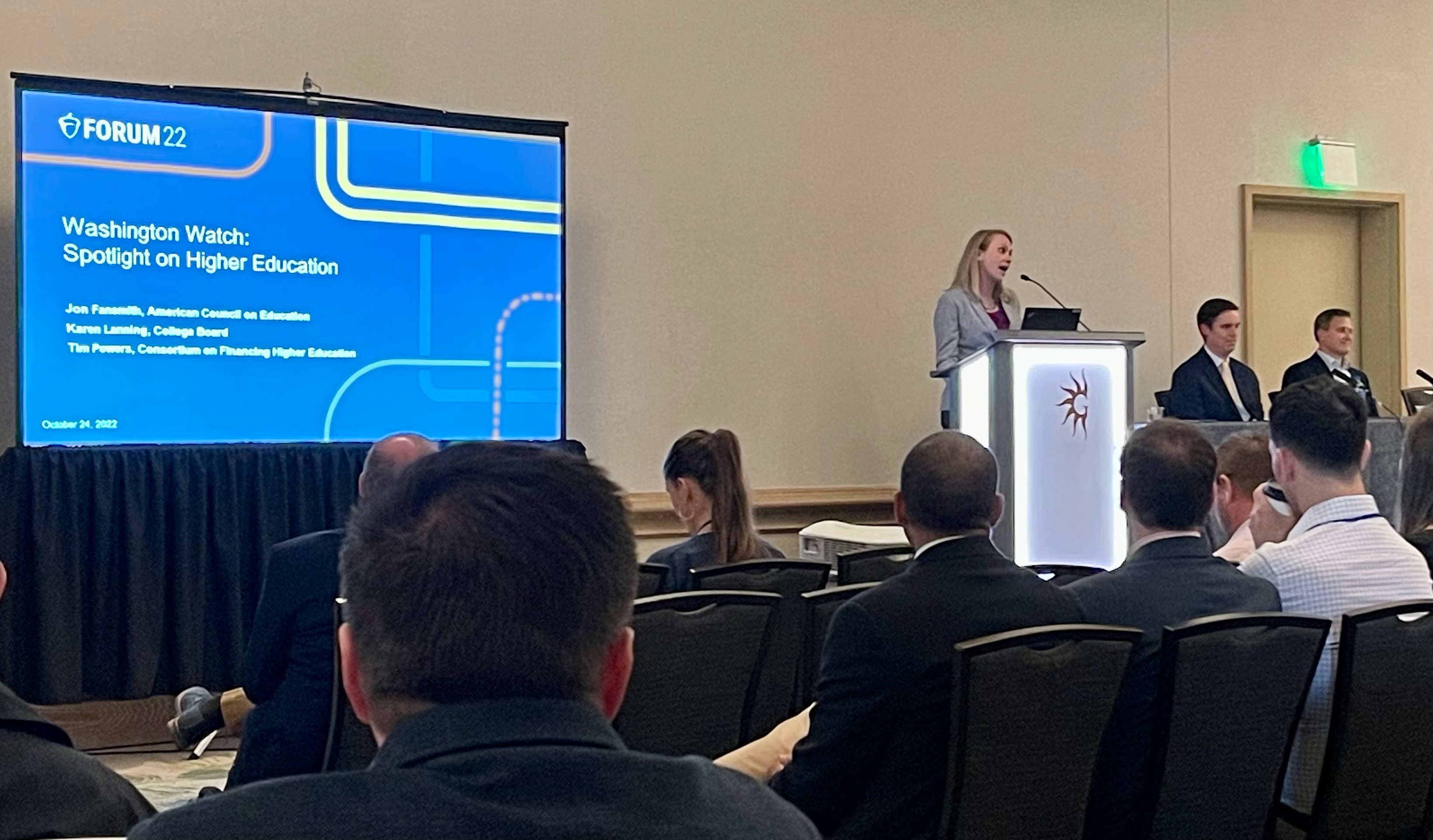 As legislation and policies are shaped and debated in Washington, D.C., Forum 2022 took a deep dive into the most pressing issues impacting higher education. Jon Fansmith, representing the American Council on Education, Tim Powers, director of public issues at the Consortium on Financing Higher Education, and Karen Lanning, executive director of federal relations and advocacy in the Global Policy and External Relations division at College Board, examined some of the most influential programs and initiatives making their way through the nation's capital, as well as their effect on students and educators across the country.

One policy initiative eliciting significant political discourse is President Biden's student debt relief for students, which followed a pause on student loan payments. After months of deliberation, President Biden, Vice President Harris, and the U.S. Department of Education announced student debt relief of up to $20,000 for loan borrowers, and recently opened applications for submission. Yet a federal appeals court has temporarily halted the program, stopping any debt from being erased. While the issue plays out in court, the Biden administration is encouraging individuals to submit their applications. Powers believes that, from a political point of view, the program delivers an integral campaign promise, and says, “The program's timing was designed to energize young voters and boost turnout for the midterm election.”

Midterm elections were of particular interest to the panel because the makeup of the House and Senate could be overhauled in November. Fansmith and Powers expect Republicans to gain a majority of the House, but the margins in the Senate are too close to call. It remains to be seen how significant shifts in the legislative makeup of Congress could influence education policies and appropriations. Issues like Title IX, the reauthorization of the Higher Education Act, and college affordability will be contested in the coming years, especially if leadership changes influence the House and Senate.

Nationwide enrollment declines are a major concern for higher ed. Fansmith stated that recently released National Student Clearing House data shows that, despite continued downturn in postsecondary enrollment, declines have slowed, especially at the community college level. As lawmakers and voters remain focused on the economy, higher ed officials will continue to monitor the labor market and adjust policies, such as short-term credentialing, to attract students back during this time of low unemployment.

The trio concluded that policies impacting higher education remain deeply divided heading into the midterm elections and will continue to be partisan regardless of the election's outcome.