Just How Big is Early Decision?

Early decision and early action plans allow students to submit a college application in the fall (typically by November 1) with the promise of receiving a decision by mid-December.

Early decision and early action plans allow students to submit a college application in the fall (typically by November 1) with the promise of receiving a decision by mid-December.  Early decision (ED) and early action (EA) plans can be beneficial to students who have thought through their college options carefully and have a clear preference for one institution.

There are a few key considerations for students who may want to apply early decision: First, early decision plans are binding — a student who is accepted as an ED applicant must attend the college. Early action plans are nonbinding — students receive an early response to their application but do not have to commit to the college until the normal reply date of May 1.

A second important consideration is that since ED acceptances are binding, students do not get the chance to compare financial aid offers from other colleges. This may mean that students from families with more financial resources are more likely to take advantage of the early decision option.

In order to provide a better context for understanding the impact of ED plans, College Board analyzed the data collected in our Annual Survey of Colleges between 2012-13 (the first year ED enrollment numbers were collected) and 2017-18 (the most recent year for which data are available). We found that despite the sense among both critics and fans that “ED is the new normal,” early decision plans remain a relatively rare offering used by a small share of all students applying to college and admitting an even smaller share of all students.

Here are some of our findings. 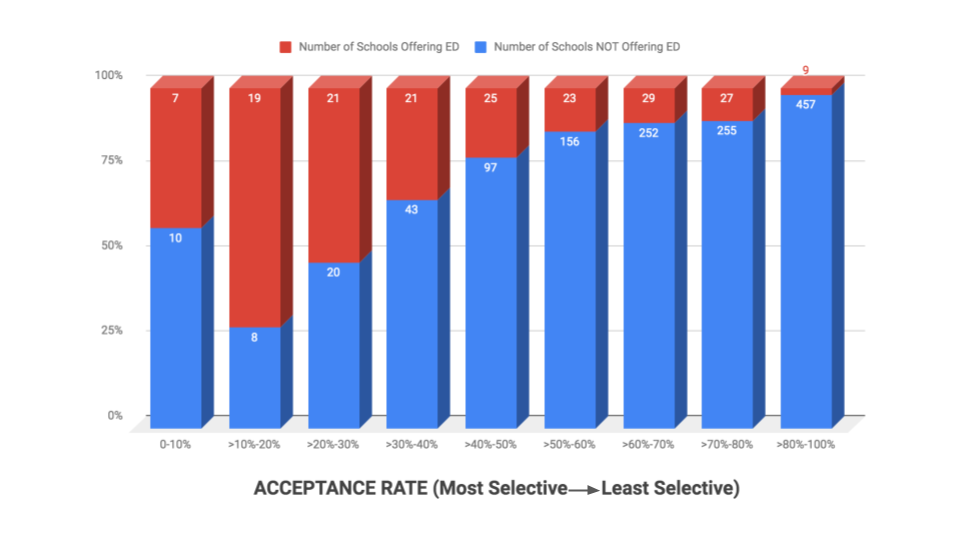 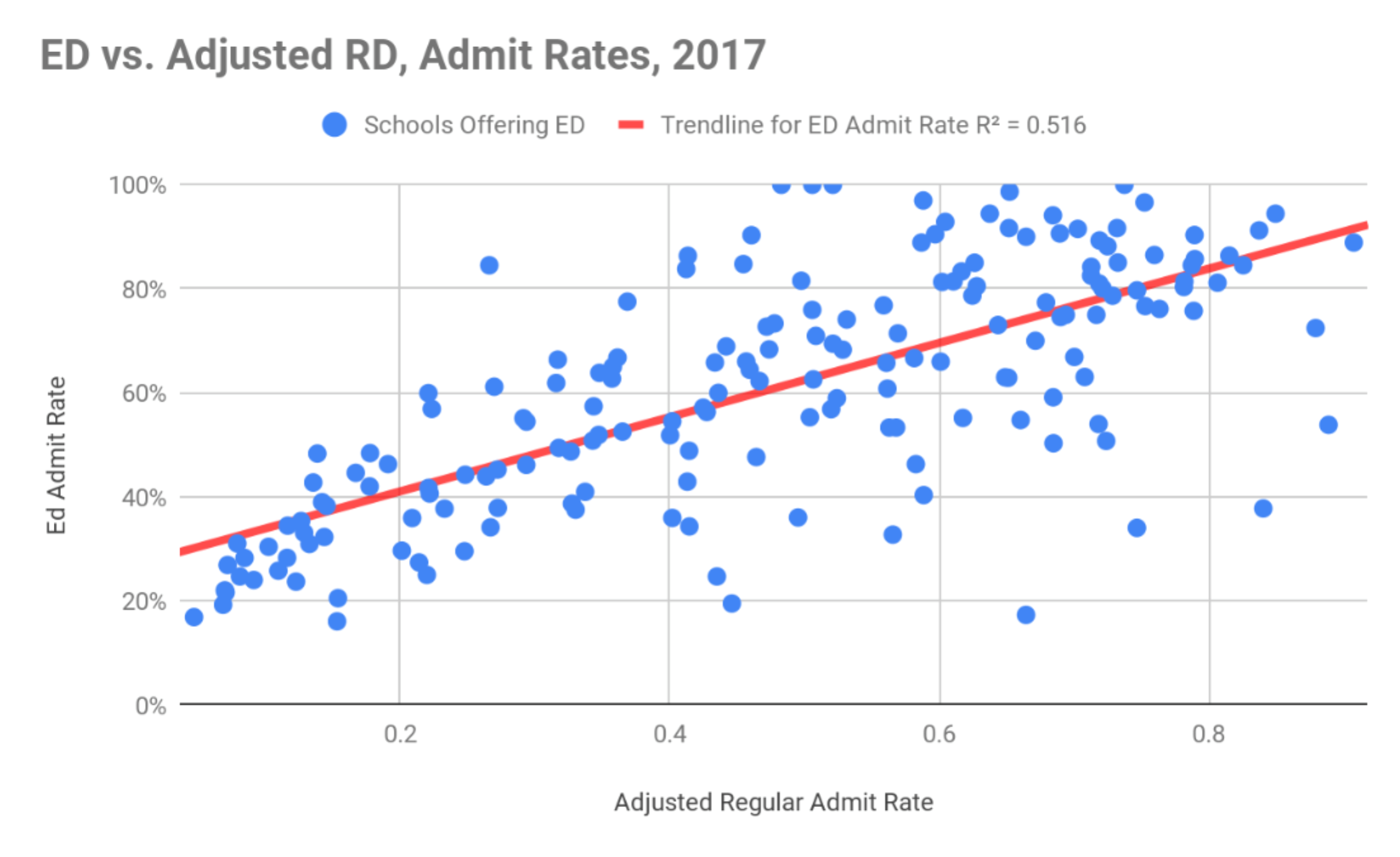 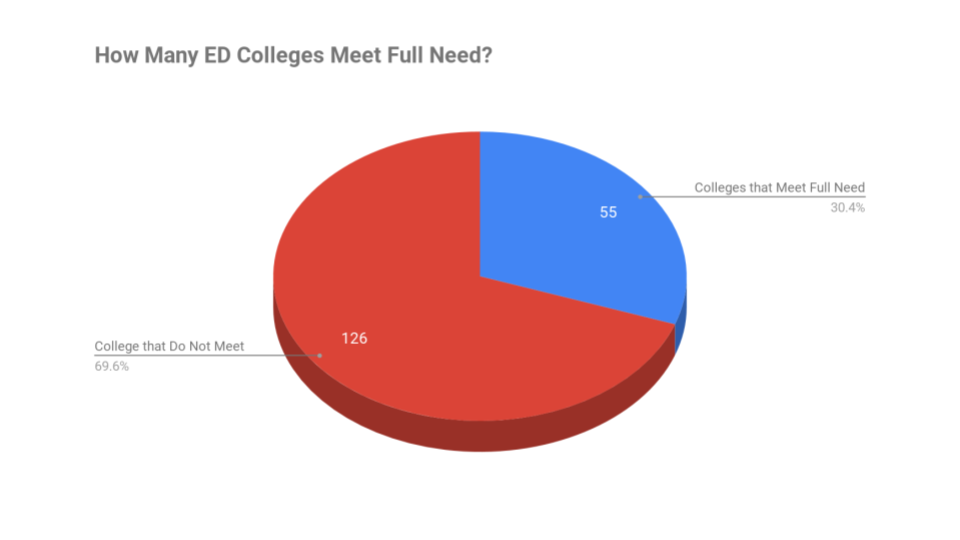 FIGURE 3: created using comparison of data from College Board’s Annual Survey of Colleges, 2017-18, with a list of need-blind institutions from College Greenlight, 2017.

Finding 4: The number of colleges offering ED has grown since 2012, but that growth has been moderate and has taken place largely among schools that accept high numbers of applicants. The share of colleges reporting numbers for students admitted through ED grew from 155 (9.7% of four-year, non-profit colleges) in 2012 to 179 (12.4 %) in 2017 (see figures 4 and 5). 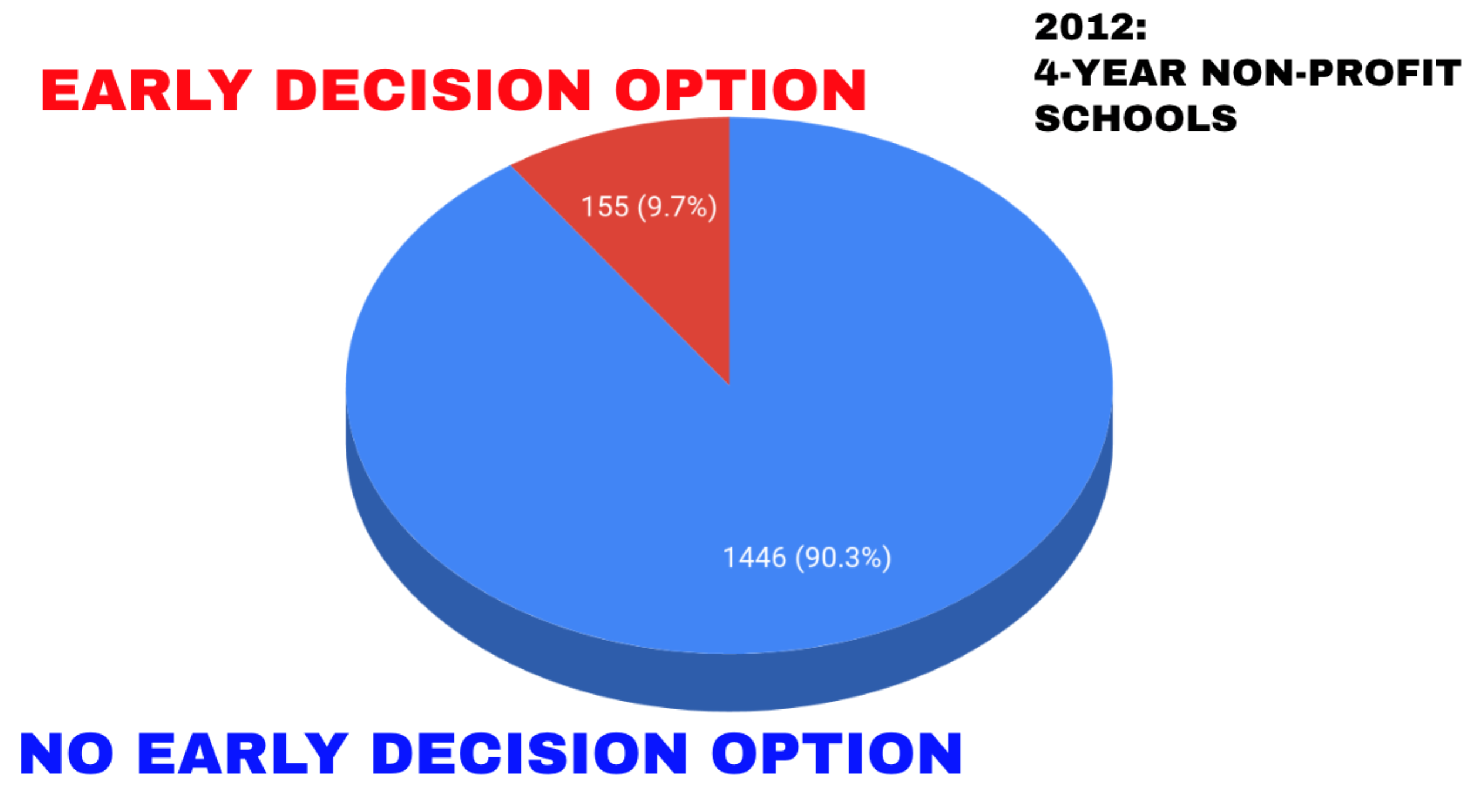 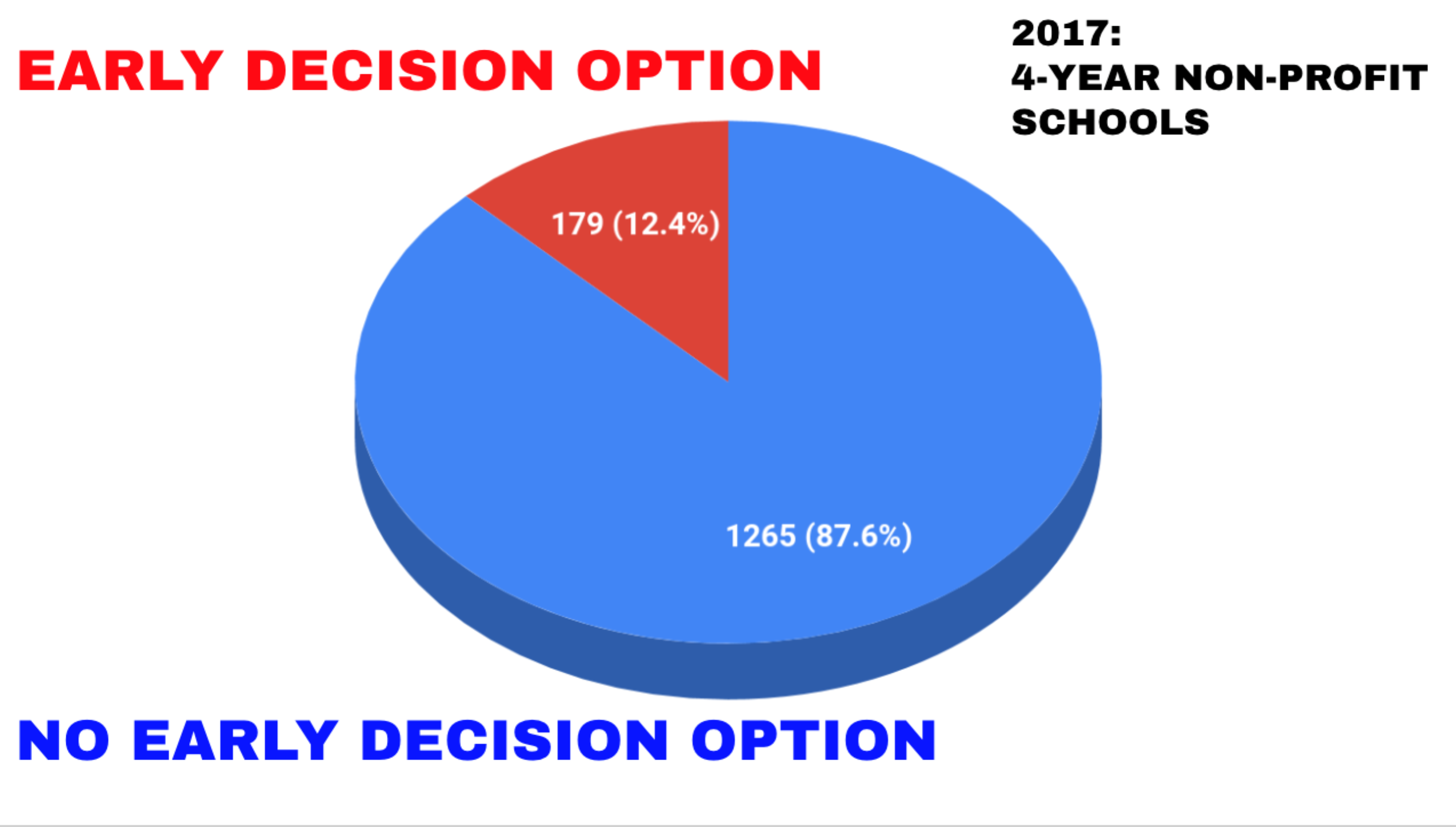 Finding 5: The number of students admitted through ED has grown, too, but the proportion here is even smaller, increasing from just over 2% in 2012 (see figure 6) to just over 3% in 2017 (see figure 7). If we included students who enrolled in two-year and for-profit colleges in that count, those percentages would be at least cut in half. 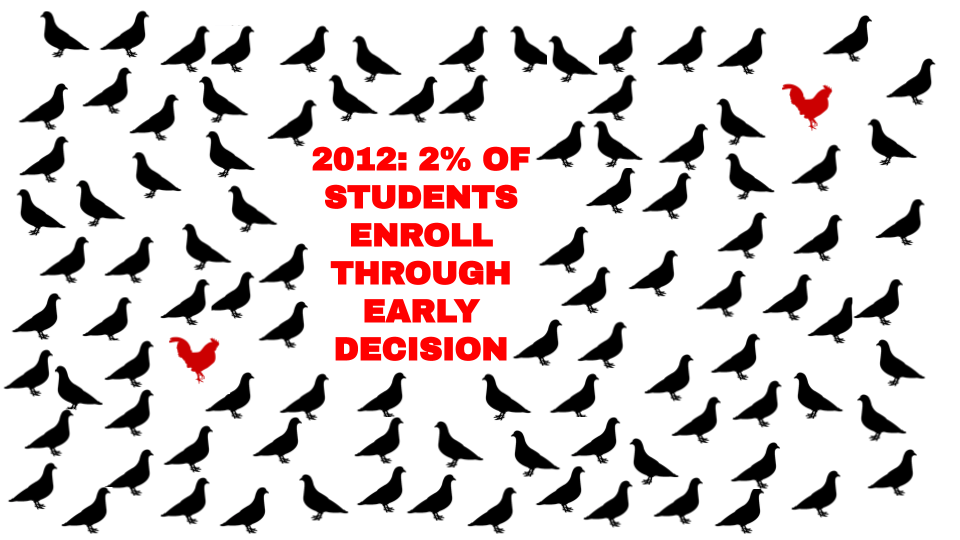 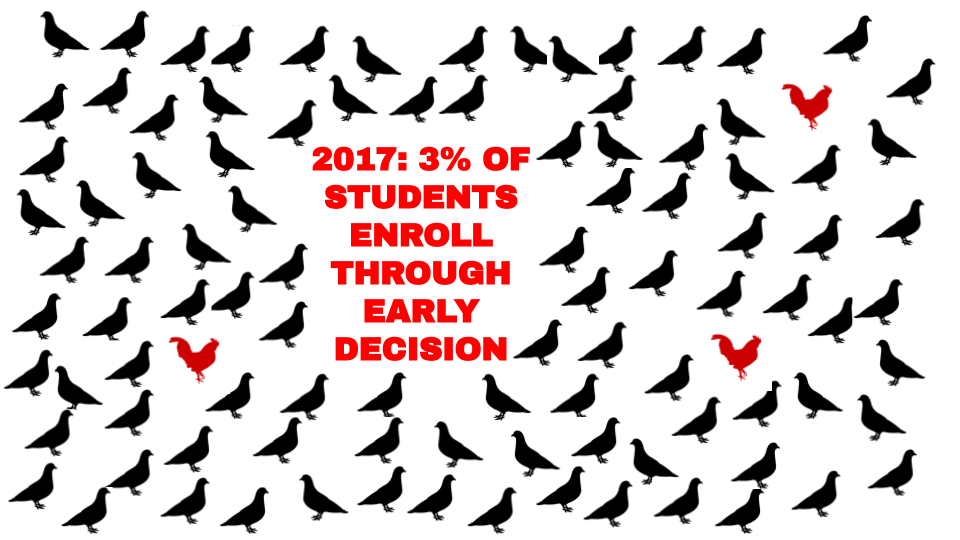 Much of the growth in the number of colleges that offer ED between 2012 and 2017 was among colleges that are very accessible in terms of admit rate and that also admit relatively small numbers of ED students (see figure 8). A quarter of the schools offering ED admitted less than 10 percent of their class early, and almost 60 percent of ED schools admitted less than a third of their students early. 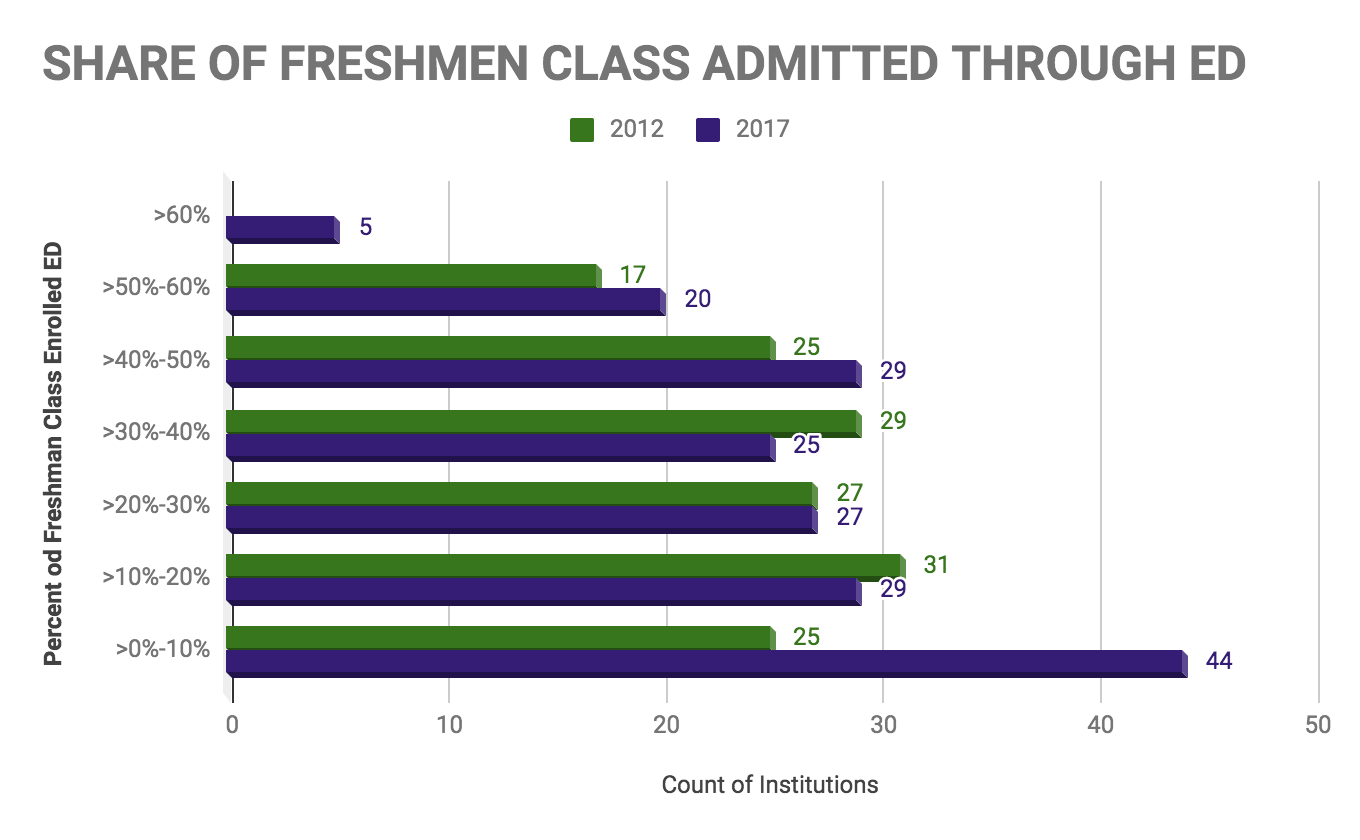 Keep in mind that ED and EA program specifics vary, so students should get information as soon as possible directly from the admission staff at their first-choice college. Most colleges share the number of students who apply and who are accepted through ED plans. You can look up the Common Data Set for almost any US school using a search engine.